How to Practice Agile Frameworks with Shu-Ha-Ri 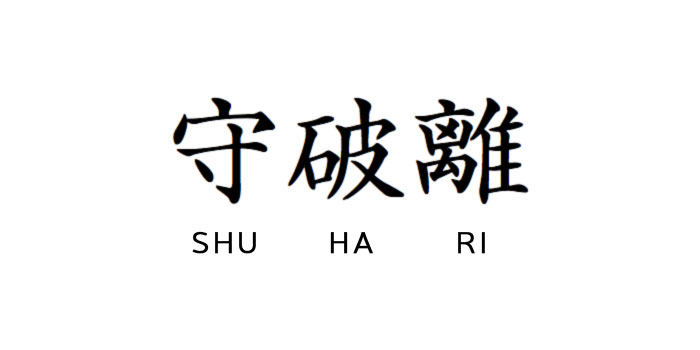 A question that arises very quickly when an organization is confronted the first time with agile frameworks like Scrum is: Why can't we adapt the framework for our needs? Basically this desire is understandable, but also wrong with sometimes fatal consequences. Agility is nothing that can be learned by just reading a book, or doing it for only one day. It is something that has to be experienced and practiced by repition over a longer time period. The best timing for adaptions or variantions is never at the beginning. The basic principle behind this is "Shu-Ha-Ri".

The Concept of "Shu-Ha-Ri"

"Shu-Ha-Ri" is originally a japanese martial arts concept that teaches the learning process as a staged process. The idea is that learning is most effective when it is not experienced as a big-bang. By that, the learning process is separated in three phases "Shu", "Ha" and "Ri". The phases build up on each other and the time spent in each phase is variable. It is also possible that the next phase is never reached. What are the three phases in general:

"Shu-Ha-Ri" in the Agile World

Translated to Scrum "Shu" means to follow the framework according to the Scrum guide, because the learning team does not know why specific things has to be done as described. Deviation from that results mostly probably in failure. When the process is automated the learning team can proceed to the next level. On the one hand, a team should not be stuck in the first level for too long, because productivity is never at maximum at this stage. But on the other hand, it is also not advised to leave too early when the basic mechanisms are not working sufficiently.
"Ha" means that the team is reflecting the principles behind the Scrum framework. It is the phase where the team gets aware which values and principles are lived and which are not or only partly. The ideal is that the team knows in which details to improve the process and in which areas variations makes sense. Usually, only when this level is reached team members communicate the advantages or the success of the agile framework throughout the organization. It means that the adavantage of the framework are well understood and can be explained to others.
The last stage is "Ri". It is the phase of experiments and innovations to change, adapt or improve the framework. The team knows what is the effect of the change and why it is useful, but also makes sure that it is in line with the basic Scrum values and principles.
Of course, the three different stages are not clearly separated, but a flowing process. As a Scrum Master or Agile Coach it is crucial to know in which stage the team is and when it is the right timing to move forward. Both has to be supported with the right mindset.